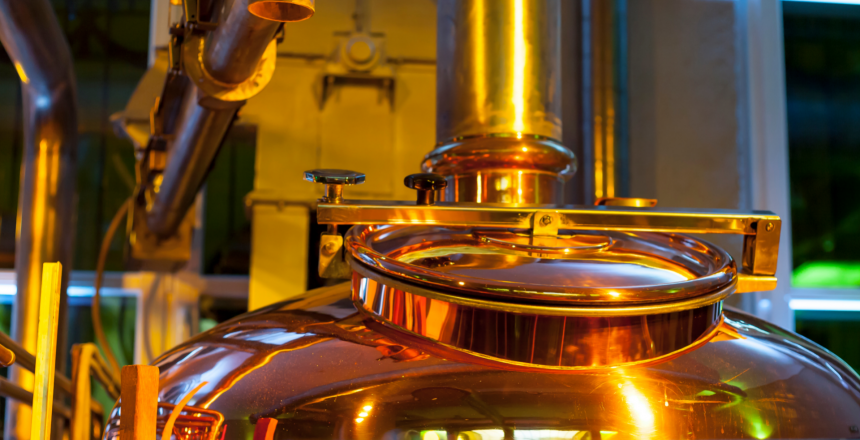 Batch Distillation: Alcohol produced in a batch still, which has a still kettle that holds a finite amount of mash for distillation. The process is intermittent and the kettle must be emptied and refilled to perform another distillation.  Batch distillation is distinguished from continuous distillation.

Fermentation: The process by which microorganisms digest and convert carbohydrates (sugars and starches) to a liquid (alcohol) and a gas (carbon dioxide).

Milling: Procedure to strip away the outer covering of grains used in making distilled spirits.

Heads: Term used to describe the impurities produced in ethanol fermentations (“congeners”), which have lower boiling points than ethanol. They include methanol, aldehydes, and esters. (Always the beginning phase of the distillation process.)

Tails: Term used to describe the congeners formed in ethanol fermentations that have higher boiling points than ethanol.  They included higher alcohols like amyl alcohol and butyl alcohol. (Always the ending phase of the distillation process.)

Mash: A substrate of starch-containing material in hot water for the purpose of converting its starches to sugars for the purpose of fermenting it into beer or distiller’s wash. The term may be used at any stage from the initial mixing of the feedstock in water, prior to any cooking and saccharification, through to the completion of fermentation, when it becomes referred to as “beer” or “wash”.

Saccharification: The process of converting a complex carbohydrate, such as starch or cellulose, into fermentable sugars such as glucose or maltose. It is essentially hydrolysis. The process may be accomplished by the use of enzymes or acids.

Malt: Any grain (typically barley), which has been steeped in water and then allowed to germinate. Drying the grains when the sprouts are about the same length as the grains halts the germination. At this stage, the malt (or “malted barley”) contains considerable amounts of alpha and beta-amylase enzymes, which saccharifies the malt starch and other additional starch in a mash to yield fermentable sugars. (In Scotland, the drying may be done by exposing the malt to a flow of peat smoke. This imparts a smoky aroma to the malt.) Malt is used in whisky production, mainly for its contribution to product flavour, while in fuel-ethanol production the necessary saccharifying enzymes are normally derived from microbial sources instead of malt.

Still: The device that vaporizes a fermented substrate by boiling it and collected the evolving vapour and condenses it back into a liquid.

Reflux Still: This still differs from the alembic in that multiple distillations occur in one single cycle. The addition of a column with bubble plates between the pot and condenser forces vapour to condense and trickle back down to encounter the rising vapour at the bubble-cap surfaces. Thus, the vapour/reflux is repeatedly concentrated and the resulting purity from one cycle is much higher than that from an alembic.

Reflux Ratio: The ratio of the amount of condensate being returned to the column to the amount being withdrawn as a product. Generally, the higher the reflux ratio, the greater is the degree of separation of the components in a distillation system.

Proof: A measure of the absolute-ethanol content of a distillate containing ethanol and water. Each degree of proof is equal to 0.5 per cent of ethanol by volume, so absolute ethanol is 200° proof. In the Imperial system, “proof” (or 100° proof) is equal to 57.06 per cent ethanol by volume, or 48.24 per cent by weight, while absolute ethanol is 75.25 overproof or 175.25° proof.

Stripping Column: In continuous distillation, it’s the portion of a distillation column below the feed tray, in which the descending liquid is progressively depleted of its volatile components, by the introduction of heat at the base.

Wort: The solution of grain sugars strained from the mash tun.

Yeast: Any of certain unicellular fungi, generally members of the class Ascomycetaceae (although a few are members of Basidiomycetaceae). Many types of yeast are capable of producing ethanol and carbon dioxide by the anaerobic fermentation of sugars. Yeasts are composed of approximately 50 per cent protein and are a rich nutritional source of B vitamins.